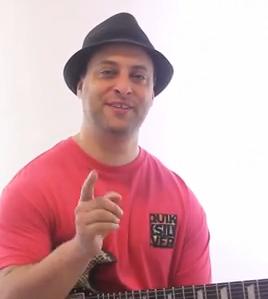 Hey, guys. Claude Johnson here and today I want to talk
about an important topic called chord voicings. You may
have have this before. I’m going to explain exactly
what it is and why it’s important.

Let’s take a chord like C. Maybe you know this particular
chord, C, but there’s not just one C chord on the guitar
neck. You could play a C chord like this. You can play a C
chord like this or like this or like this. The theory behind
it is that a C chord is made of the notes C, E and G. So
anywhere you could play those notes together would be a C
chord. Here are standard note positions and you have C, E, G
and then C, E again. You’re allowed to repeat notes in a chord.

What if I were to put my pinkie up here on the 3rd fret of
the high E string? Instead of C, E, G, C, E, I’d have C, E,
G, C, G. It’s a very different sound. This one versus this
one, depending on what voicing. Each version of the chord
is called a voicing. Think of each note in the chord as a
voice so that voicing is different that one because the top
voice is singing, so to speak, a different note.

If you have a simple progression like C to F you’re going to
get one kind of a feel from that open position. If I switch
that up to this high one, same strum pattern but a very
different feel, right? Or this one. Or this one. Some chords
are going to be a lower register, some will give you higher.
There are different ways to do it. You can do it versions.
That’s another way to change the voicing, like this. Different
ways to do it. It’s important to be aware of. All a voicing is
is just a different variation of the same notes on the fretboard.

I go a lot deeper into chord voicings and how to use them in a
powerful way in my guitar course called Killer Guitar Control
Secrets. So check that out at guitarcontrol.com/secrets and
I’ll catch you in the next video. Take care.