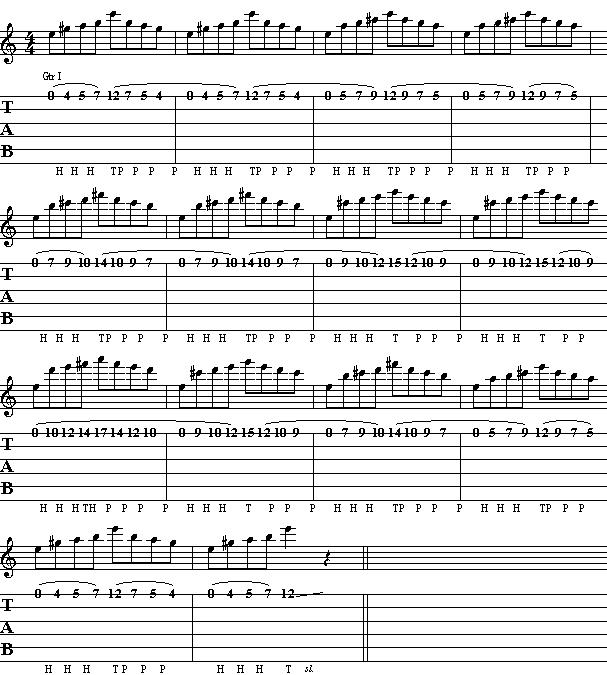 Hi everybody. This is Darrin Goodman from guitarcontrol.com
bringing you this video lesson today. Today I want to show
you a cool little  its more of an exercise than I would
say is a lick, but it uses tapping with some open strings
and it just kind of follows-up the notes in the scale. Be
sure to click on the link in the description for the tabs
and lets get to it.

The reason that I kind of came up with this, I had
students that were having problems with tapping,
with hammer-ons and pull-offs and stuff and then
when playing on a single string, keeping the other
strings quiet. So this is kind of a way to kill
many birds with one stone.

Im just going to do that repetitively and what
were going to be doing is moving up the positions
each time we do it. So the first sequence is frets
4, 5 and 7 and then tap the 12th fret.

Now were just simply going to descend
back down the sequence.

I would recommend practicing this with a
metronome so that way when youre  itll
force you that when you switch positions
that you dont miss any time with it.

After you get to where you can do that pretty good,
just move it to the 2nd string and you can just do
the same exact thing. And then so on and so forth.
You can move it to the 3rd string, the 4th string.
So each time you change to different strings its
going to force you to have to  the angle of your
hand is going to be different; youre going to have
to move your hand where youre muting down.

Now, when youre playing on the lower strings, you
cant very well palm mute the  keep the other
strings quiet with your right hand. So what I simply
do with this hand is I just let my fingers kind of
droop over to try to keep them quieter. It is a lot
harder to mute higher strings than it is the lower
strings because youre fretting notes that are one
the strings that are below the strings that youre
trying to mute, so it does take a considerable
amount of practice.

I hope you enjoyed that. Be sure to click on the link
in the description for the tabs and until next time