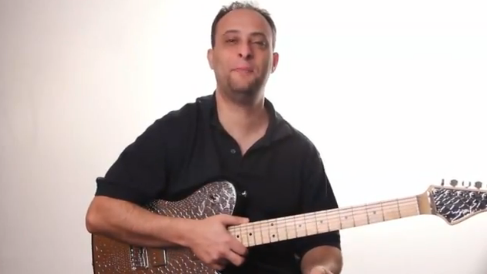 An arpeggio is the notes of a chord
played seperately.

Another thing is that arpeggios hold the key to creating some really advanced
licks and playing. When we filmed Virtuoso Guitar Secrets with Silvio Gazquez, a 2-time
guitar idol finalist, I learned that arpeggios are one of his most common
tools for creating mindblowing leads and solos…

Now in today’s lesson, i want to give you a little exercise… We’re going to take a D minor 7 arpeggio and
look at all different ways we could play it on the fretboard.

This will help you see the fretboard shapes and how things connect. You can use this shapes to create licks,
and to navigate the neck as youre playing solos over chords.

Ok, so here’s the exercise, we’re going to play a D minor 7, going all the way up to
the octave and back. We’ll always start at the 5th fret A string… We’ll always go back the same way we go up…
And when we go up, we’ll play each note, either on the same string as the previous note, or
the next string higher than the previous note.

And the idea is play all the various combinations we can. Check out the above tab to see all the combinations.

Hey, guys. Claude Johnson here
from guitarcontrol.com and
today I want to talk about arpeggios.
I’m going to explain a couple of things
and then I’m going to give
you a really cool exercise that
you can use to learn arpeggios
and to master the fretboard.

First of all, what is an arpeggio? Well,
an arpeggio is simply the notes
of a chord played separately.
That’s all it is. For example,
let’s take the chord D minor 7.
That chord has the notes D, F, A and C.
So there, I just played a D minor 7 arpeggio.
And you can play those four notes going
up and then hit the octave again,
a little bit more musical.
You can play it up and down.

Another thing about arpeggios is that they
really hold the key to advanced lead guitar
playing. A couple of years ago we shot a
course called “Virtuoso Guitar Secrets”
with Silvio Gazguez who is a two-time
guitar idol finalist. When we shot that
course I really learned that arpeggios
are one of the most common tools that
can be used to create really mind-blowing
leads and solos. Now, if you’re interested
in checking out that course, you can check
it out at www.guitarcontrol.com/virtuoso.

So today’s exercise, we’re going to look at
the D minor 7 arpeggio and we’re going to
play a bunch of different combinations.
This is not a chop-builder, per se; it’s
more of a fretboard knowledge exercise
because we’re going to look at all the
different shapes, patterns and how it
all lays out on the fretboard. This
isn’t music, again, just playing the arpeggio,
but you can use these different
patterns to create your own licks
and also you can use the arpeggios
in your soloing.

A couple of rules for this exercise.
First of all, the picking doesn’t matter.
You can use alternate picking, sweep picking,
hammer-ons, pull-offs, you can use any fingers
you want, slides, whatever. It’s all up to you.
The main point of the exercise is just to learn
how the different patterns lay out on
the fretboard. So it’s mostly
about the left hand.

We’re always going to start on the 5th fret
of the A string; that’s a D. We’re always
going to play up, straight up the arpeggio
five notes and back down. So five notes
and back, that’s root, 3rd, 5th,
7th and octave.

Also, when we go up, we’re always going
to be playing — each note will be on the
same string as the previous note or
a higher string. We’re never going to
be going to a lower string when we’re
playing up, because that just creates
too many combinations. We actually
already have 15 ways to play this.

So we’re ready to start building
all our combinations of
these arpeggios. Try to follow the
pattern here. I think you’ll get it.

Hopefully you can extrapolate that pattern.
All the next combinations are going to just
have one note on the A string and build up
from there. Check the tabs to get
all the patterns.

I hope that was useful. And once again,
the idea is to just kind of learn more
about the fretboard and these different
arpeggio shapes. You can theoretically
do this with all kinds of arpeggios,
triads, major 7, dominant 7, whatever you like.
But I think this is a helpful exercise.

Once again, check the tabs and that’s
all for now. Have an awesome
day and I’ll catch you next time.