Country music has a long-standing love affair with the blues. A good many of the greatest country songs written have been influenced by the blues in some way, which isn’t surprising when you consider how closely the two genres are related. Country music can be complex in its simplicity, with the major, the pentatonic, and the blues scale at the root of the music. Country blues guitar licks are played in both up tempo and ballad type songs and often draw from what’s called composite blues scale.

A composite blues scale (shown below) can be conceived in several ways. It makes more sense for me to see it as a blend of the blues/major pentatonic. You can also view the scale as a blend of two blues scales wit their roots a third apart. For example, you could combine a C blues with an Eb (three semi-tone or a minor third). The use of these two scales gives country guitar players the ability to employ major and minor sounds against the major and dominant chords used so frequently in the country genre.

Whether played on a pedal steel guitar, electric, or acoustic, in an up tempo country boogie or in a country ballad, this composite blues scale gives country guitarists the freedom to create a myriad of complex melodies and licks.

If you listen closely, you’ll hear a lot of minor pentatonic scales played over dominant seventh chords in country, as in the example below.

Country music at its most basic level incorporates the sound of the blues. A good portion of the licks and solos you hear will encompass the basic blues scale by default, but as simple as it is, country melodies can be complex. It’s a sound that can be heard not only in traditional country artists, but with rock artists like ZZ Top who incorporate both country boogie and blues into their brand of rock, and in southern rock bands like Lynyrd Skynyrd too. Take a look at “La Grange” from ZZ Top and take notice of the blue notes used throughout the riff. 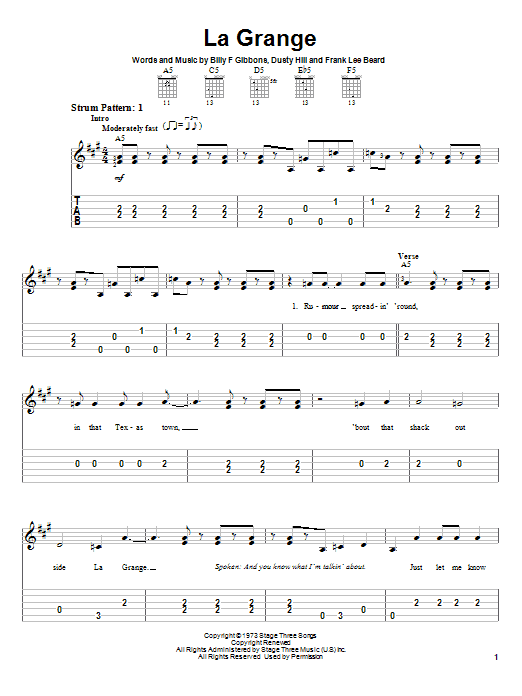 Try using a composite blues and creating licks over a I-IV-V progression and then add either a ii or a vi to hear the variation of country blues guitar licks you can create.