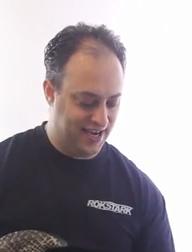 I see guitarists confused all the time and it’s not necessary.
Music theory is very simple. In fact, I look at it like music
as numbers. So if you understand numbers, then you can
understand music. And you don’t have to be a mathematical
genius or anything.

If you look at the notes — now, there’s 12 notes in music.
So if we start at the bottom, let’s just take the low E string.
If you play that open it’s an E. The 1st fret is F and then
it’s F sharp, G and so on. By the time we get up here,
now we’re back to E again, which is called an octave.

In the key of C there are no sharps and no flats. Remember,
here’s the name of the notes: A, B, C, D, E, F, G and then
you have your sharps and flats. So for example, between A
and B there’s B flat. In the key of C, these 7 notes, no
sharps, no flats.

If you take that same interval pattern but start at a different
note, you’ll have a different scale. If we start on the A we
can get an A major scale. The nice thing about the guitar versus,
say, the piano is that you can move to a new key and it’s the
same shape. If your fingers are used to playing that and you
play it down here, the only different thing is as you move
down it’s a little bit wider, but it’s still basically the
same shape.

In the key of A we do have some sharps. We have A, B, C sharp,
just because it’s in a different key. It’s kind of important
to know whatever key you’re in, it’s going to have a specific
set of notes. Some of them can be sharps or flats. In the key
of C there are zero sharps or flats, which makes it convenient.
What I recommend you do is sing the scale. Let’s go back to
the key of C.

If you’ve ever heard that song, “Do, Re, Mi, Fa, So, La, Ti, Do”.
Some people call the notes that way. Whatever way you want, as
long as you’re singing it and internalizing it and hearing it
and understanding it also with your mind.

Another thing about the guitar is that notes go everywhere:
up, down, backward, forward. If you’re in the key of C you
could jump to anywhere on the neck — here’s a C up here —
and you can play the same scale. It doesn’t matter as long
as — I don’t want to hit G sharp, because that’s not in the
scale. It’s a different — it’s not like I can’t use that
note in a song or a solo, but if I want to just learn the C
scale and master that first, which is a good idea, I want to
know up here it’s just G, A; not G sharp.

I hope that made sense. Understand what scales are. You can
spend lots of time learning different shapes, but we’re
talking about music theory concepts. So understand the
concept of a scale, a key and in the next video we’ll
talk about building chords.

I go a lot deeper into how music theory applies to learning
your favorite songs in my Ultimate Guitar Song Collection,
also known as the “Ultimate” Beginner Guitar Course”. Just
check that out. Do me a favor and click there right now.
Go to guitarcontrol.com/beginner and I think you’re going
to really dig it. So check it out.