Hybrid picking is a technique where you’re basically
using your pick and also the other fingers of your
picking hand.

Here’s a simple example… Watch the video and
check the tabs. 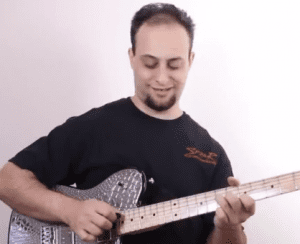 Hey, guys. Claude Johnson here from
guitarcontrol.com and today I want to
talk about hybrid picking,
which is basically using your
pick and your other fingers of
your picking hand and you can do
some cool stuff like playing a
simple chord progression, kind of
make it cool. So let me show you
exactly what I’m doing here.

How I’m picking this, I’m holding
my pick between my first finger
and thumb, picking the D string
and then I’m going to be using my
middle finger to pluck the G string
in an up motion and using my ring
finger to pluck the B string. So if I twist
my hand a little bit so you can see it
better, it’s like… Once again.

Now, that’s basically hybrid picking,
just using your pick with your fingers.
I’m also using a specific picking pattern
which goes like this. It’s an eight-note
pattern: one, two, three, four, five, six,
seven, eight; or basically going from the
high string to the low string and repeating.
Remember, ring finger, middle finger, pick;
ring finger, middle finger, pick.
This eight-note pattern starts on
the D string. So we have D
string, B, G, D, B, G, D, B.
And if you like to learn from
the tabs, please check the tabs,
or if you like to learn just
playing by ear, it just…
So that’s our eight-note pattern.

A couple of quick pointers with
this stuff. Just make sure you have
the right tone when it’s ringing out,
make sure you’re picking at an even
tempo and really work on the phrasing.
Get it so it’s… Make it so it flows
and just work on one chord at a time
until it flows. It’s got a nice rhythmic
quality to it, rings out nicely and
then you can start moving around.

Along with that, don’t pick like too
loud or too quiet; get it just right.
It’s real easy to go too loud or too soft.
You kind of want it right in the
middle and consistent. So work on that a little bit.

Another thing that’s important when
you’re sliding here, you can slide up
and get a nice little effect. So by using
that slide it adds a little bit of
flavor to it. I don’t really recommend
sliding the whole chord, like this. You can
do that, too, but I like to just
lift off and just slide on
the D string. So when I’m done with this
chord I lift off with my middle and
first finger and I’m just sliding
on the D string. After I slide I put
my fingers back down and keep playing
the chord. Same thing when you slide back.
I feel that gives it a real nice, clean kind
of phrasing when you do it that way.

You can keep all your fingers down and you’ll
get a thicker sound, like I said. It’s kind of
an interesting effect, too. You can
try it both ways.

I hope you enjoyed that and hopefully
you’ll come up with your own cool musical
ideas based on hybrid picking. If you
want to get the tabs for this lesson
just click the link below the video
description. That’s all for now. Rock
on and I’ll catch you next time.