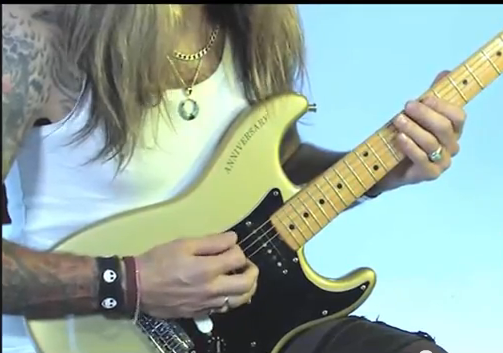 All right, guys, we’re back with you now. Now we’re going
to talk about just stabbing the Hell out of these strings,
downpicking the whole way. Scotty and James Hetfield,
they are the kings of this kind of picking.

I was very fortunate enough to be a part of Joey Belladonna’s
band for a long time and I had to learn all these ridiculous
Anthrax songs. Scott just — oh, my God. The guy is just
ungodly when it comes to right hand picking down. I had
to learn a whole different format of playing. I’m used to —
in the first segment we talked about down-up picking. I’m
more of a right-hand triplet picker. So I had to learn
how to start from scratch, like we’re going to do together.

So we’re going to start talking about just really hammering it.
Hammer of the Gods kind of picking, okay? Basically you’re
going to use your E again. I know why it goes back to E is
because it’s a basic structure for all songs. “Iron Man” is
all about that E. So we’re going to just talk about downpicking.
The most important thing about downpicking is it has to sound
like it’s very tight. It can’t be sloppy when you’re playing. It’s
got to be straight down all the way. So it’s like… Your throat
has got to be like… It’s like a sore, like a nonstop machine gun.

So let’s try this pattern. We’re just going to downpick it.
Just straight down. Every eight bars you can stop, take a
breather, then two, three, four, five, six, seven, eight;
one, two, three, four, five, six, seven, eight. Now we’re
going to walk it. Here we go. Kind of like “Painkiller”.
A lot of bands will do this really straight ahead downpicking.
We’re going to just use some notes inside. We’re going to
use a D and an E, just to show you the pattern. We’ll put
an F in that one. A little trill, like a hammer-on. Let’s
try that together real slow. Real slow. That’s the pattern,
now bring it up. I’ll skip around a lot to show you how
it goes, but the whole pattern is just straight ahead.

I never change my picking pattern. It’s all down. It’s all
in my left hand going with the trill and my left hand
making the movement up and down the neck. Real slow.
Up to speed. There’s like a whole pattern of using this
picking technique. I do a couple of pitch harmonics in
there on the E and the F. It just gives it a cool vibe.