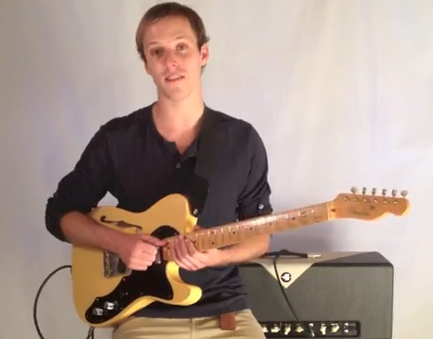 How’s it going everybody?
This is John McClennan and I’m here today
with guitarcontrol.com, bringing you this
guitar lesson video blog.

Today I want to take a look at just a simple,
simple tip that might save you some embarrassment.
It’s called putting your cable through your strap.
So let’s say you have a guitar strap, you’re standing
up and you’re playing and you don’t put your cable
through your strap. So it’s just plugged in like that.
And basically what could easily happen is you just step
on that cable while you’re jamming-out, rocking-out on
stage and all of a sudden it goes right out. And guess
what, in the middle of the song, your amp’s buzzing and
you’ve got to bend down, pick it back up.

So recently I was at a gig, actually, at this place
called The Hotel Cafe in Hollywood, watching a band
and here I am like sitting front row and I’m seeing
this guitar player, same thing, just like this.
And sure enough, he didn’t really move around much
during the gig. And I was just looking at him and
I’m like, man, this doesn’t look good. And he steps
forward right in the middle of his guitar solo, like
goes out to take his solo and just steps on the cable
and just pulls it out. It’s just silly.

What you’ve got to do is you’ve got to take your cable
and you’ve got to put it behind, like this. See?
It goes through the strap and then bring it around
and plug it in. Guess what? If you step on that it’s
not going to pull directly out anymore.