What fusion guitar playing is exactly can be sort of ambiguous. It is a term thrown around pretty casually. By definition, fusion means the blending, or fusing, of more than one styles. Technically, then, if you’re guitar playing is a combination of country and rock techniques and styles, then you are a country/rock fusion guitarist. The term can be further refined by more specific phrasing, such as jazz fusionist, blues fusion, etc. If you do a little research, you’ll see that most people who refer to fusion guitar are referring to Al Di Meola, Pat Metheny, Allan Holdsworth, Carlos Santana, and Joe Satriani—guitar players who primarily fuse jazz with another music genre. That’s why you’ll often hear the term jazz fusion guitarists.

Fusion guitar, then, is the fusion of two or more styles of music. Typically one of the genres is jazz. Songs like Santana’s version of “Black Magic Woman,” illustrated below, have distinct jazz components blended with Latin rhythms and sounds that almost define what fusion guitar playing is about.

The next example shows a diminished scale used over a blues, which is an example of jazz fusion playing. 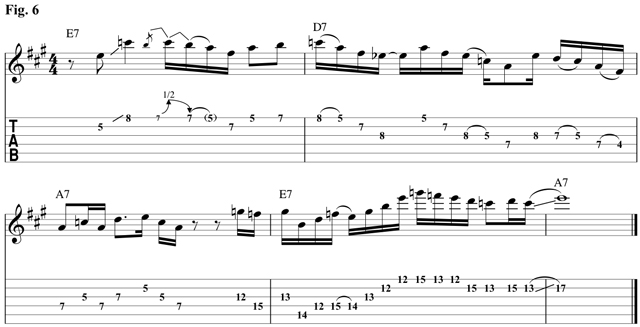 Fusion guitar is largely an experimental style of playing that expands beyond boundaries and incorporates a range of scales, modes, and progressions to create richly textured variations on pre-determined themes and musical motifs. Basically speaking, there are no limits. Playing fusion guitar is like having a blank canvas and access to all the colors of the rainbow and beyond. Maybe that’s a cheesy metaphor, but it works for me, and it clearly describes what fusion guitar playing is all about.

If you’re interested in learning how to play fusion guitar, I suggest you do some Internet surfing, but avoid a lot of written material and focus on finding videos online that can help you get acclimated to the techniques and sound used in fusion guitar playing. This has always been the best approach for me. There are tons of free videos that teach jazz fusion, fusion guitar techniques, and some of the blues and jazz components often found in fusion guitar. Youtube is a great resource. Using these video guitar lessons is a great way to learn the basics of fusion guitar playing as well as the more advanced stuff that can take your playing to the next level. Fusion guitar videos are like having a guitar teacher with you around the clock. Nothing will kick your fusion education into gear faster.